All Out of Chips

While there have been a large number of stories regarding the impact of the global shortage of computer chips, the pain level is likely to increase as we approach the holiday season with its increased demand for consumer electronics such as game consoles, phones, and tablets. This problem has been developing for years although the immediate cause is generally attributed to Covid-19. First, we consider the short-term impact of the shortage and then move to the long-term development of the chip industry.

Casualties of the Shortage

The most notable victim of chip shortages is the automobile industry which saw sales plummet by just under 30% between April and August of 2021. This decline is not a function of demand but of a lack of supply as demonstrated by the fact that the current number of vehicles for sale is roughly 950,000 as compared to typical inventory of 3 million units prior to the pandemic. Unfortunately, there is no quick fix for this problem which leads Seraph Consulting to forecast that the global automobile industry will lose $450 billion in sales through the end of 2022. One of the derivative effects of the auto industry’s woes is upward pressure on the prices of used vehicles and rental cars. From the depressed level of April 2020, the average price of renting a car for leisure travel rose 129% by June of 2021 although it has since decreased slightly. The following chart depicts a price index for used cars and trucks.

Note that prices increased 43% over the past year which contributed meaningfully to the overall increase in the Consumer Price Index of 5.2%.

The shortage has impacted many other industries as chips are critical components of a wide range of consumer and industrial products. A recent poll of homebuilders found that 90% report difficulty in securing enough appliances to complete projects underway. Because of this demand, appliance prices have risen about 6% in just the last three months. On a personal level, I recently attempted to purchase a replacement for an aging home generator and was given a delivery time of 52 weeks. More concerning is the fact that the shortage is also impacting manufacturers of medical devices and other critical equipment.

Structural issues will be covered in the next section, but there has also been a “perfect storm” of short term factors that contribute to the shortage. The first is soaring demand. Work from home increased global demand for computers by 45% versus pre-pandemic levels and the lockdown drove a 112% increase in sales of gaming hardware for the year ending June of 2021. Similarly, I have written several times about the surge in home improvement expenditures, the demand for second homes, and so on. On the supply side, several fires and weather-related events slowed production both in the U.S. and Asia, and the global shortage of shipping containers has dramatically impacted delivery schedules. More recently, the spike in Delta Variant cases led to temporary shutdowns of critical production lines in Malaysia, Vietnam, and the Philippines. While these issues are temporary, the U.S. faces a number of longer term challenges to the stability and predictability of its chip supply.

First, the U.S. share of worldwide semiconductor manufacturing is just 12%, down from 37% in 1990. Second, the U.S. does not have the technical capability to manufacture the most complex chips that are used in higher-end applications. These two factors leave us significantly exposed to both supply chain issues as well as national security concerns. In particular, the world’s most advanced chip manufacturer is Taiwan Semiconductor Manufacturing Company (TSMC) which brings into play the ever-present tension between China and Taiwan.

The U.S. chip industry is not competitive for several reasons. First, the cost of building a fabrication plant here is about 30% higher than a similar facility in Asia. Second, foreign students are disproportionately represented in U.S. semiconductor graduate programs leading to a domestic talent shortage. Finally, the semiconductor industry is heavily subsidized in a number of competing countries.

The U.S. chip industry is taking some steps to address these issues. Intel recently broke ground on a $20 billion investment in two new fabricating facilities in Arizona, but it takes two to three years for a new plant to come on line. It has also announced plans to spend as much as $100 billion over the next decade to build fabricators in Europe. However, TSMC recently announced that it will be investing $100 billion over the next three years in R&D, plant upgrades, and a new fabrication facility in Arizona where it will produce high-end chips for Apple and other end users.

President Biden held two summits on the semiconductor industry since taking office and proposed the U.S. Innovation and Competition Act (USICA) that provides $52 billion to fund research, design, and manufacturing initiatives. This bill passed the Senate but the House passed two alternative bills that will require the negotiation of a single bill that both houses can support.

Industry experts forecast that the shortage will ease in 2022 or 2023 but it is absolutely critical that the U.S. Government and the semiconductor industry join forces to strengthen our capability in this vital industry. Both our economic future and the security of our nation depend on it!! 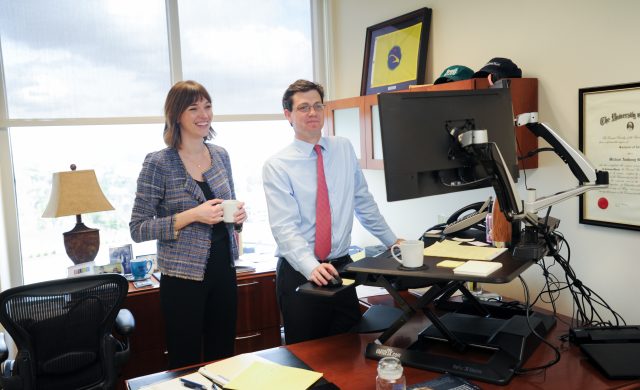 Supporting Families With Special Needs
Did you know?According to a recent study by the Pew Research Center, religion is the most common cause in America, accounting for 32% of all giving